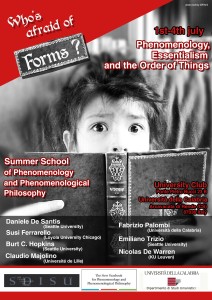 Who’s Afraid of Forms? is an advanced summer program in phenomenological philosophy to be held July 1-4, 2013 at the University of Calabria. Seminars, delivered in English, will be led by Professors De Warren, Hopkins, Majolino and Palombi, and will address topics in the philosophy of science, ontology, ethics and politics. For details consult the program. To participate, please submit your materials by May 15. For registration, travel arrangements, accommodations  and fees can be found on the program website. For more information, email phenomenologyinfo2013@gmail.com.

“Phenomenology is the study of essences; and according to it, all problems amount to finding definitions of essences”. It is in such bare terms that Merleau-Ponty introduces, in the Preface of hisPhenomenology of Perception, one of the most crucial and highly problematic issues in phenomenology, i.e. that of so called “phenomenological essentialism,” which has been widely criticized by both post-modern Continental and Analytical philosophers. According to this line of critique, phenomenology as such­-whether due to its ontological presuppositions or its epistemological intuitionism, its defective understanding of the nature of language or its rationalistic assumptions—is defined by philosophical claims that postulate a host of ideal, universal and a priori entities such as “essences”, “eidê”, “categories” etc. Such entities, it is further charged, can also be grasped “in person” by means of an allegedly specific act of direct “grasping” labeled as “essential seeing”, “eidetic intuition”, “categorial intuition” etc.

The activities of the SSPPP will be devoted to a full analysis of the meaning and the scope of such “essentialism,” its historical origins, implications and limits. This seminar will also investigate whether essentialism is in fact, as charged, a necessary component of phenomenology as such-as Merleau-Ponty suggests-or if it is only related to a certain understanding of phenomenology. The implications of such analysis do not just concern questions of ontology, but reach across the full spectrum of philosophical topics: ethics, political philosophy, epistemology and theory of science. By offering a fresh and new approach of the function and status of essentialism in phenomenology, this seminar will provide a unique format for a confrontation with Analytic philosophy (for example, the anti-essentialist linguistic philosophy of Wittgenstein and nominalism of Goodman) as well as post-structuralism (Foucault’s archeology of knowledge and Derrida’s deconstruction).