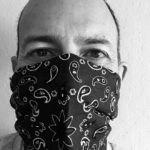 I’ve been dreaming about masks and social distancing lately. When I go running in my Oakland, California neighborhood I wear a mask. Earlier, during the pandemic I dreamt about running, masked, up a hill where I do actually run most days. In the dream, I found myself avoiding a couple I saw walking, even avoiding their tiny dog! In the dream, I was struck by the feeling that we were all becoming kind of crazy, losing something human.

In waking life, I recognize that in an already socially distant city, my neighbors had mostly become even more aggressively distant: avoiding even eye contact with each other when passing, masked, in the street, as if my gaze itself, without words, could transmit a virus.

I even felt this reflex myself, to shift my gaze away from the Other…which could invite some interesting reflections on intersubjectivity, were it not so alienating! I mean, why are you avoiding even seeing me? After all, I’ve covered most of my face not just for my own benefit, but for yours. But this avoiding of my gaze–it feels defacing. I covered my face, but you negated it.

“The face is meaning all by itself. You are you. In this sense we can say that the face is not ‘seen.’ It is what cannot become a content, which your thought would embrace; it is uncontainable, it leads you beyond…the relation to the face is straightaway ethical.” (1985 86-87)

To encounter an Other’s face is to contact their alterity–their unobjectifiable otherness, because they are an other person. The meaning of that other humanity is already intrinsically ethical. Therefore, the face of an Other invites a response–it elicits one’s responsibility. In the town where I grew up, it was normal to greet others walking on the street, at least in one’s own neighborhood, whether or not one knew them personally–in fact, especially if one didn’t know them personally. A kind of responsiveness was taken for granted. Sure, this had an overlay of convention, bourgeois etiquette…but still, under all that, there was an acknowledgment of the Other that communicated something to a child growing up.

Lévinas said that encountering the Other’s face: “I do not simply remain there contemplating it, I respond to it. The saying is a way of greeting the Other, but to greet the Other is already to answer for him. It is difficult to be silent in someone’s presence; this difficulty has its ultimate foundation in this signification proper to the saying, whatever is said.” (1985 88)

Now, the social distance of my present city and region already made it “normal” to ignore others, before Covid. Whereas in a true metropolis–what I experienced living in Chicago, for example–to not make eye contact with strangers on the street did not, for me at least, signify ignoring the Other–rather, it was a way of acknowledging others and granting him or her their anonymous belonging to the huge city we both inhabited. A different kind of intersubjective bond.

That shared anonymity was in a way respectful and spacious. But San Francisco and its surrounding communities aren’t remotely metropolitan. The scale of life is much smaller, and yet the West Coast is more hyper-individualistic than the American Midwest! So in this  sense, the pre-Covid Bay Area didn’t have anonymity as much as a sense of people actively ignoring each other, which has a different felt sense altogether.

So the objectifying gaze of the Other, nowadays, is really the opposite of what Lévinas pointed toward. The Other’s face, in my neighborhood, in general seems to be interpreted as a threat. More than that: avoiding the Other’s eyes is to avoid recognizing his or her face. That defacing is precisely a denial of one’s responsibility for the Other. I’ve experienced that pull too: the pull into self-contained interiority, to protect one’s sovereign self by denying the Other and oneself as already called to responsibility by the Other’s face. Lévinas said, “To be human means to live as if one were not a being among beings.”

Of course, there are always the exceptions, those individuals who under these circumstances are more contactful, even with the mask, because rather than falling back upon living merely as a “being among beings,” they are humanly responsive. For Lévinas, that is our answer to being face-to-face with Others, and facing this call, “I can substitute myself for everyone, but no one can substitute himself for me.”