Here is a link to a beautiful essay of Akihiro Yoshida’s, On Tamamushi-iro Expression: A Phenomenological Explication of Tamamushi-iro-no (Intendedly Ambiguous) Expressive Acts. Dr. Yoshida is Professor Emeritus of the University of Tokyo, and Professor of Psychology, Shukutoku University. In Japanese, he writes, tamamushi-iro-no expressions are those that, when spoken, lend themselves to multiple differing interpretations by the one to whom they are spoken…and while tamamushi-iro-no can be translated as “ambiguous” or “equivocal,” neither of these captures the lived meaning of those expressions. Tamamushi-iro-no literally refers to a jewel beetle, Tamamushi (Chrysochroa fulgidissima), whose color changes depending upon the angle from which he is seen.

Yoshida reflects that ambiguity is “one of the conspicuous characteristics of traditional Japanese culture and its people,” and so a phenomenological meditation upon lived-ambiguity is a reflection upon a shared world. In bridging contexts or cultures, and in the context of opening up a genuinely intercultural question in a phenomenological spirit, Yoshida asks: “Does not ambiguity constitute the incommensurable that would necessitate a rite of passage if we were to transgress the boundary between the domains of Japanese culture, in the East, and European cultures, in the West?” 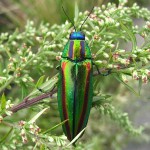 I encourage anyone interested in phenomenology as a path of intercultural inquiry to spend time with this essay, because what is conveyed is not merely psychological nor sociological nor linguistic, but a sense of the world of the other, from the position of an interested witness. So there is a sense of the phenomenon that’s being examined, and that sense permeates the essay.

For example, reflecting on the experience of wordlessness, he writes: “Silence assumes a meaning, when both the person keeping it and the other parties commonly understand that it could  be broken. The meaning  assumed by silence cannot help but be multivocal, thus silence takes the characteristics of tamamushi-iro expression.” Similarly, his reflections upon the multiple ways in which the word dōmo (どうも) is used, are illustrative not only of grammar but of the multiple, feelingful relational states that are conveyed thorough a kind of nuanced ambiguity.

What is  so important for me, as a reader of this essay, is the clear way in which Yoshida points to the dynamism of everyday communication: communicative acts are nothing like mechanical exchanges of fixed signs between static transmitters! And he conveys this in a striking way. Yet in the exploration he doesn’t seek closure, but keeps opening up the question and inviting the reader’s awareness of his or her own experience of the phenomenon in question, and the experience of reading the essay itself, as a window onto another lived-world.

Postscript: Since I am not a scholar of Buddhism, I was initially confused by Yoshida’s contrasting of the Mahayana and Hinayana Buddhism in his article in order to draw a distinction between “Daijou” motives (self-and-other directed) and “Shojou” motives  (solely self-directed) (p. 271). Unfortunately, a number of American sources on Buddhism equate “Hinayana” with Theravada Buddhism, a distortion which would lead to a serious misreading of Yoshida. Yoshida is using “Hinayana” in a classic sense: it refers not to Theravada but to a now-extinct school of  early Buddhist thought which was critiqued as exclusively concerned with enlightening the self and neglecting one’s fellow human beings (see Hirakawa Akira’s A History of Indian Buddhism, 1990). I checked this understanding with Yoshida, who confirmed it: he is using “Hinayana” to refer to a self-concerned attitude. –Marc Applebaum