Dialogue and a tanka

Merleau-Ponty (1993) wrote, “For the speaker no less than for the listener, language is definitely something other than a technique for ciphering or deciphering ready-made significations” (p. 80). He is ever insistent that being-in-the-world is an embodied event, an ongoing discovery, and he relentlessly examines the ways in which experiences are given to us, prior to our labored formulations about them.  This careful seeing yields jewels of description, for example: 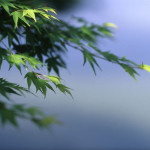 “Language is much more like a sort of being than a means, and that is why it can present something to us so well. A friend’s speech over the telephone brings us the friend himself, as if he were wholly present in that manner of calling and saying goodbye to us, of beginning and ending his sentences, and of carrying on the conversation through things left unsaid” (p. 80).

In so few words Merleau-Ponty evokes the experience of the other’s unique presence with us, through speech.

But what is speech? The presence of the other for us is far more than significations, data, ideas, or “information.” When a friend speaks to me, if I’m present–rather than preoccupied or distracted!–the other person is with me. Any conversation deserving of the name is a being-together. In it is the constitution of what Husserl names the “we-world” (Wir-Welt).

When speaking to far-away colleagues and friends, more often than a telephone I use Skype or Google+. Through these media we have not only the friend’s speech, but a wide range of his or her gestures, tones, a fraction of his home, a piece of her wall, a painting, a window, the light in another country, another time of day.

Is it simulated proximity? Or am I really invited into my friend’s home, his office, his kitchen? A neuroscientist might interestingly inquire into the measurably embodied traces of this experience–the ways in which I respond, mostly nonverbally, to the other’s presence, how my presence in the here-and-now is in dialogue with his or hers, and how this occurs for both of us, mutually, even reciprocally.

As a phenomenologist, it is enough to live these changes attentively, awake to the remarkable phenomenon of the momentary next-door-ness of Tokyo or Rome or Mexico City or Lund. Not only space and time but language is being bridged, somehow, and the everydayness of two world merges in a way that makes the world outside my door feel surprisingly distant–by way of contrast–when I step out of my home. Tokyo was closer to me than Oakland, for the past hour.

So much of poststructuralist thought seems committed to emphasizing ruptures, gaps, discontinuities, incommensurabilities of all kinds–and of course we all experience such lapses, but arguably when they command our attention it is as foreground over and against a background of lived-continuities that is the taken for granted fabric of human being-together, however imperfectly lived.

In the aftermath of dialoguing with far-away friends, as a phenomenologist, my curiosity awakens–like a virus, almost

autonomously!—and seeks, as if of its own accord, to unfold and examine what I’ve lived, to reflectively open up the implicit meanings that fill me–not solipsistically, but out of a conviction that there’s something in the lived-experience, calling to be shared with my fellows.

I’ve been meeting regularly over Skype with Dr. Yoshida Akihiro for some time–he lives near Tokyo, I live near San Francisco–we share stories and thoughts, as fellow travelers in phenomenological philosophy and psychology.

With him I had the experience, as I’ve had  many times before with friends in the US, Europe, Latin America and Asia–that phenomenologists are few and far between! Dialoguing with a classically-trained Japanese scholar evoked, without my fully realizing it, some poems I read years ago of Taigu Ryôkan, a 19th century Soto Zen monk whose poetry described his rural, mendicant life in a poor hut. Here is an example translated by Smith and Huang (2009):

Reply to a Friend

In stubborn stupidity, I live on alone
befriended by trees and herbs.
Too lazy to learn right from wrong,
I laugh at myself, ignoring others.
Lifting my bony shanks, I cross the stream,
a sack in my hand, blessed by spring weather.
Living thus, I want for nothing,
at peace with all the world.

Your finger points to the moon,
but the finger is blind until the moon appears.
What connection has moon and finger?
Are they separate objects or bound?
This is a question for beginners
wrapped in seas of ignorance.
Yet one who looks beyond metaphor
knows there is no finger; there is no moon.

It might surprise those who regard Ryôkan as a “hermit” that he directs his poem toward a friend. But of course intersubjectivity is immediately present in the poetic act, which is a reaching out to others. Half-remembering the images from Ryôkan, I mentioned to Yoshida-san that we phenomenologists are often solitary as well–oftentimes our peers and friends in phenomenology are far away! So, I joked, maybe we are each a little like a monk, living isolated in a poor hut in the mountains, and when we see the traces of the fire of some other monk, even if he is far away, we feel cheered up! The signs of the other’s fire breaks our solitude.

Yoshida-san seemed to find this comparison not only apt, but hilarious: for me, this was a good confirmation.

He had shared with me that for some time he has been composing poems in the tanka style–a poetic form that originated in 8th century Japan. Naturally as phenomenologists we could not bear to simply name something like the tanka: we needed to reflect upon its form–to inquire playfully into the eidos of the tanka–and we arrived at the idea that such poems, which are quite short, aim to express as succinctly and purely as possible what Husserl might call a single intuition. The tanka is an aesthetic expression of the arising of that intuition. And I appreciated the free spirit with which Yoshida-san was writing, not to please an audience, but to find out, as if by accident, what insights emerge through this spontaneous expression through tanka.

So I was surprised when Yoshida-san emailed me this tanka: 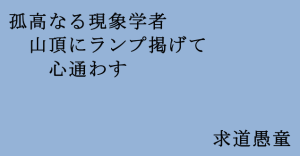 Yearning to have sincere and honest dialogues

Choosing to hold up his lamp high above

Even now and ever into the future

So the image that I shared with him–inspired by my memories of Ryôkan–came back to me, in a Japanese form. And actually, as we discussed the poem, it went through several revisions and reshapings, arriving finally at the forms we’ve included here.

Dialogue is most real, I’d say, when one shares oneself with the other person sincerely, and the response one receives is surprising, because it opens up a new horizon for both people. Suddenly we are sitting very close together, despite the distance, and sharing something. And in fact we were both sitting: only one of us was in suburban Tokyo and one in the Bay Area. Both of us were  in our own homes, and at the same time we were at home together. We are what Husserl called “homecomrades” (Heimgenosse).

In the literature of premodern mysticism, it is not uncommon to read stories of adepts who reported experiencing the intimate presence of their fellows despite vast geographic distances. Our own ordinary but nonetheless rich experiences of connection over distance deserve attention, as full of the minor details and accidents of daily life as they are.

“True speech…speech which signifies, which finally renders “l’absente de tous bouquets” present and frees the meaning captive in the thing–is only silence in respect to empirical usage, for it does not go so far as to become a common noun. Language is oblique and autonomous, and if it sometimes signifies a thought or a thing directly, that is only a secondary power derived from its inner life. Like the weaver, the writer works on the wrong side of his material. He has to do only with language, and it is thus that he suddenly finds himself surrounded by meaning” (p. 82).

Isn’t what is true of speech generally, also true of our conversations? We talk, we reach out intentionally to our friends: and then sometimes, our words give birth to a meaning that then begins to move us. Freed from our strenuous efforts to signify something preconceived, our only task is to unfold a meaning that’s already emerging, present to both of us, in a world we’ve found together–despite our distance.

Hermeneutic postscript: In our discussions about this post, Yoshida-san and I found that the tanka itself kept changing; I would play with the English translation, and Dr. Yoshida would respond with a revised Japanese version. The humble campfire morphed into a burning brand in Japanese, then a signal fire, and finally a lantern. This back and forth was its own conversation, and something interesting stood out: the tone of Yoshida-san’s first English version was imperative, a call to the phenomenologist. Working with this feeling-sense, I produced this draft, with him:

High on the mountain, alone, tending your fire.

Encourage yourself and many far-away friends

Now and into the future, then…… 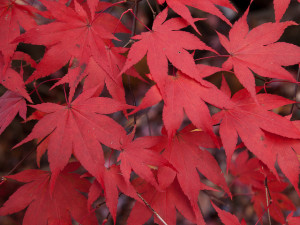 However, upon reflection, Yoshida-san felt that althought the original sense of his poem was indeed imperative, it placed a forceful demand. He felt that a different voice was more true to the tanka form: namely, a more peaceful attitude in which the subject of the poem, the phenomenologist, is being purely witnessed in what he (or she) is already doing. The final Japanese version reflects this sensibility.

In our discussions and multiple revisions, he proposed that “The difference between the English poem by you and the Japanese tanka by me should remain, rather than [be] vanished, and certainly be appreciated, from the phenomenological appreciation of the perspective differences of individuals situated in the different life-worlds.” I agree, and in that spirit I have included variations.

Lest the reader think that this is a simple case of two strictly separate and absolutely different life-worlds, I would suggest that Dr. Yoshida’s perspective is too complex to be reduced to a simple dichotomy: reading his essay On Tamamushi-iro Expression: A Phenomenological Explication of Tamamushi-iro-no (Intentionally Ambiguous) Expressive Acts, you will see how he describes his experience of living through  and reflecting upon various culturally-conditioned expressive attitudes when he moved from Japan to the US, for graduate studies, and then returned to Japan. The ongoing dynamism of his point-of-view is evident.

I cannot help but include Yoshida-san’s explanation of his nom de plume, 求道愚童 , which he translates as “a stupid/naïve child seeking after truth.” It is found in the lower right-hand corner above, below the tanka. His commentary upon the four kanjis comprising this pen name is:

“求 Seeking –道 Michi (道(way)＝”do”≒truth) 愚 stupid/naïve, which implies sometimes far better than “clever”, ”shrewd” or even “intelligent”. 愚 is sometimes and by some people more valued/appreciated than “cleverness” and very near to “wise” and “wisdom”. So, 大愚 is regarded as an ideal way of life sometimes and by some people. 童 child, young child, but it is used to be applied even to old people, in the view of life that a man returns to a child when he gets very old. It is a symbol of his humbleness and at the same times his assertion that he has overcome the clever vulgarity of the adult social world. It is apt for an old retired person. So, 求道愚童 is my pen-name.”

5 Comments to “Dialogue and a tanka”