Perhaps the most exciting thing I have found in becoming a phenomenological psychologist is how fundamentally important it is to value the subjective psychological perspective when seeking to understand people (Giorgi & Giorgi, 2003). Television “reality shows” have become popular because they provide a “fly on the wall” perspective of dramatic events in a world that most average people do not personally experience. Beginning with the reality series COPS such reality TV shows gave the viewer a “partnership” or “ride-a-long” experience with police officers while sitting in the comforts of their own homes.

While not literally seeing things from the police officers’ perspective, the camera captured a view through the windshield of the police car. This viewpoint became more and more intriguing to the public as “dash-cam” (dashboard mounted video camera) footage from police cars were used by the media as part of its reporting of police activity. Dash-cams give the public a front seat perspective to car chases, arrests and even some officer slayings.

The view from the police car seat is intriguing and adventurous for the viewer. The series COPS took the camera mobile, accompanying officers as they left their cruisers and entered the homes, yards and neighborhoods of citizens. On many scenes, the camera position was along-side the subject officer(s) so as to give the viewer a sense of participating in the enforcement action. The viewer was able to hear the dialogue between the police, verbalized thinking from them as they encountered problems, and explanations and summaries of the cases upon their resolutions. Sometimes the suspects spoke directly to the camera; other times they ignored it. Overall, reality TV gave the everyday viewer a new way to see law enforcement that was not offered by its predecessor fictional police series like Dragnet, Adam-51, or Hill Street Blues.

I like to use the analogy of the “helmet cam” (helmet mounted video camera) to describe the Giorgi’s (2009) descriptive phenomenological method of psychology in its applications to police and public safety psychology. The helmet cam gives the viewer of the video a first-person (or subjective) viewpoint that is different than that of a third-party spectator or witness. Helmet cams have also become more popular in television sports coverage. This is because it can give a richer vicarious experience of having the experience. I use the helmet cam analogy because it presents the event’s perspective from the participant’s rather than the onlooker’s position.

As a career police officer, firefighter, and emergency medical technician (EMT), I have exchanged stories with other emergency responders regarding many rich experiences and issues they have encountered personally. Unfortunately, most of the research in criminal justice, fire science, and emergency medicine is aimed at the “objective facts” for policy and procedural purposes. Consequently, the lived-experiences of the people doing the work is not analyzed deeply enough nor through an appropriate means of inquiry that maintains their voices and perspectives. For public safety psychology, the lived-experience of such events is “the” perspective that is most informative about how the events impact the responders.

The emergency responder goes forth to help others when their lived-situations have become unmanageable. So much of what is experienced by the emergency responder is of interest to psychology, particularly psychological acts like decision making, coping, perceptions, and planning. Giorgi (1985, 2009) has explored psychological phenomena such as motivations, hopes, and anticipations that are personally lived but can reveal intersubjective structures of  lived-experience.

For example, the personal experience I had that made descriptive phenomenological methodology most immediately relevant was a “close call” I had as a police officer when I nearly shot a 17-year-old during a traffic stop. Without going into the details, I essentially held my fire to later find out that the suspect was not reaching for a gun but for his baseball cap. I knew that had I pulled the trigger, the events that unfolded and the transformation of his and my worlds would have been irreversible and irreparable. 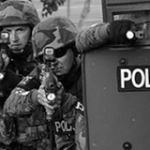 I was close enough to “know,” to some degree, what it would have been like to be in a real shooting; except it was never fulfilled in my lived-experience. So I conducted my doctoral dissertation on police shootings using the descriptive phenomenological psychological method in order to take the “helmet cam” view of the officer participants (Broomé, 2011b). But this is where the “helmet cam” analogy has its limitations.

Through the research findings, I discovered a general structure of the police deadly force experience that describes the experience from the first-person perspective.  I have used the descriptive structure that I discovered as a framework to better understand the deadly force experience when I dialogue with others about training, policy, and other social implications. Using the descriptive findings readers can find a means of connecting with the participants’ experience in a way analogous to having pulled the trigger him or herself, but without the existential consequences.

The research findings provide a rich voice from the officers, which can contribute to the ongoing discussion of the use of police deadly force. The information may prove to be valuable to current and aspiring police officers, law enforcement leaders, policy makers, and other stakeholder groups. The real deadly force experience can also be compared with my previous study on deadly force training in simulation (Broomé, 2011a).

Oftentimes students have difficulty selecting a dissertation topic. Fire, police and emergency medical services personnel have rich experiences to draw upon in the phenomenological investigation of intersubjective psychological structures. So many issues like altruism, heroism, sacrifice, dilemma decisions, etc. are a part of our everyday lives as emergency and rescue workers. There are many subjective points of view: victims, witnesses, perpetrators, and the professionals. The marriage of emergency services topics and the descriptive phenomenological method in psychology is a new and open horizon for rich human science research.

2 Comments to “Broomé: A Helmet-Cam for Emergency Responders’ Experience”