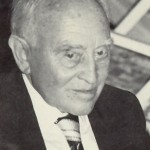 Philosopher Ludwig Landgrebe (1902-1991) was one of Husserl’s closest assistants. Landgrebe’s description of Husserl below was translated by Algis Mickunas, Professor Emeritus, Ohio University, and included by Lester Embree in his Representation of Edmund Husserl:

“Almost everyone who first encountered Husserl experienced something of a disappointment at not immediately seeing any external signs of how this quiet and simple man could come to have the vast international fame that he had finally garnered. His thought was a simple recounting of what he had seen and thought as if it was a report about a distant land he had explored. And yet, something soon came to compel the listener. Husserl did not offer a precise and cold report of his discoveries. Rather, thinking itself spoke through him, a thinking that he had mastered and made into a spirit who resided in him and transformed him as soon as he began to speak. He was no longer himself, name and rank were forgotten, the surroundings disappeared for him, he offered nothing but chains of thought, which he had developed and brought to ever new turns. His glance went far beyond things, almost blind to the environment, toward a distance that might be far outside or deep inside. In this way, he sketched a magic circle in which reality was encompassed.

One might enter his study preoccupied with oneself, with one’s concerns and joys, with events of the day. Then one was confronted as if by another world, where nothing that would concern one’s individual self mattered any more. In this world, the concentrated power of thought, exercised for decades, lead its own life. One became almost ashamed to have thought about oneself. He could be so fatherly, so kind, completely devoted and helpful to his students and friends. When he was surrounded by his thoughts, however, everything stood still. Even for the listener there was nothing more important than what Husserl was saying and hours then passed as minutes.”