Moustakas and Giorgi seek to develop qualitative research approaches that do justice to the human subject. They each make the claim that their methods are based upon Husserl’s phenomenological philosophy. Hence both offer adaptations of Husserl’s philosophy for psychology.  Moustakas seeks to articulate what he terms a “transcendental phenomenological” approach while Giorgi presents an empirical-psychological approach. 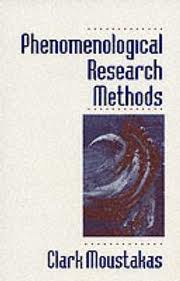 I would argue that a close reading of Phenomenological Research Methods (1994) reveals that Moustakas’ approach is not grounded in a good grasp of Husserl’s work–something a phenomenological philosopher would quickly realize in reviewing the book.  As a result, Moustakas’ renderings of key phenomenological terms like  transcendental subjectivity, the reduction, and the epoché are inconsistent with Husserl’s work, as is his account of the critical distinction Husserl makes between the empirical and transcendental ego.

I think Moustakas’ 1994 book is best regarded as representing his own approach to working with people, one based upon a humanistic therapeutic perspective, rather than one well-grounded in Husserl’s philosophy. Moustakas’ statement that his approach not only follows Husserl but is at the same time “heuristic” suggests that Husserl is more a source of inspiration for Moustakas than an actual epistemological foundation.

Examples of misreadings include Moustakas’ equating of transcendental subjectivity with presuppositionlessness (p. 60) and his description of the epoché and reduction as nothing more than the setting aside of personal prejudices. Moustakas describes the phenomenologist’s research attitude in the following way: “presumably this person has set aside biases and has come to a place of readiness to gaze on whatever appears and to remain with that phenomenon until it is understood, until a perceptual closure is realized” (p. 73). Moustakas emphasizes that in phenomenological research “I, the experiencing person, remain present. I, as a conscious person, am not set aside” and “with an open, transcendental consciousness, I carry out the Epoché” (p. 87). There is enough similarity between this representation and Husserl’s words for a beginning student to assume Husserl’s phenomenology is being carefully read and applied. Yet, for one better-acquainted with Husserl’s writings, problems are immediately evident, as will be seen.

The first difficulty is that Moustakas neglects Husserl’s critical distinctions between the various modes of subjectivity, as well as between various types of phenomenological reductions. And whereas these are philosophical distinctions, they are fundamental to understanding what’s meant by a “phenomenological attitude,” and therefore central for adapting Husserl’s philosophy for psychological research.

Why does this matter?

The heart of the matter is this: for Husserl, the empirical and transcendental modes of subjectivity are embodied in the same locus: the individual human being. However, Husserl does not intend to suggest that the transcendental “I” is merely the familiar “me” of everyday life, but with a more humanistic, open-minded attitude, as Moustakas’ formulation implies. This would mean that we can “become” transcendental subjects merely by reflecting and setting aside biases—in other words Moustakas reduces Husserl’s sense of the transcendental to something like “becoming a more enlightened person”—a plain misreading of Husserl. Though this appears to be a more easily understandable, humanistically-rendered version of phenomenology, it contains important flaws.

Revealingly, he uses clinical examples to illustrate what he means by authentic presence, and it is tempting to conclude that Moustakas is seeking a clinical and humanistic appropriation of Husserl’s philosophy in order to represent it as a means of self-actualization. But this raises the question: is the interpretation sustainable? In other words, is it compatible with Husserl’s phenomenology? Or instead, it is more accurately viewed as a humanistic, clinical approach to research that isn’t–and perhaps need not be–based upon phenomenology?

As Erazim Kohák wrote, “I can and indeed must bracket myself as what Husserl will later call a ‘natural subject’” (1978, p.  45). In fact Husserl wrote once the epoché has been effected, “I am not an ego” in the sense of an empirical I (1970, p. 184).  The researcher loses the validity (facticity) of the natural attitude and must suspend the “distinction and ordering of the personal pronouns,” since the facticity of I-the-man, you, we, etc., has all been rendered phenomenal, not real.

Hence Husserl wrote: “The ‘I’ that I attain in the epoché…is actually called ‘I’ only by equivocation—though it is an essential equivocation since, when I name it in reflection, I can say nothing other than: it is I who practice the epoché, I who interrogate, as phenomenon, the world…[as] ego-pole of this transcendental life” (1970, p. 184).  This bare ego-pole, Husserl writes, “is not a piece of the world; and if he says ‘I exist, ego cogito,’ that no longer signifies, ‘I, this man, exists.’ No longer am I the man who, in natural self-experience, finds himself as a man” (1973, p. 25). In other words the transformation of perspective that Husserl’s positing, and indeed claiming as a lived-experience, is more profound and has far deeper implications that those acknowledged by Moustakas.

The Transcendental Onlooker, or Witness

Turning to Husserl’s words we see that transcendental reflection is not a mere noting and setting aside of biases. Rather, it requires a mode or dimension of consciousness termed the “transcendental onlooker” which is not equivalent to or subsumed by the empirical ego. As Eugen Fink (1970) wrote, Husserl’s transcendental phenomenology describes three egos in the context of the reduction: “the ego which is preoccupied with the world,” which he terms “I, the human being,” the transcendental ego, and the “onlooker” who performs the epoché (p. 115-116). The ego preoccupied with the world is the empirical “I,” the self of the natural attitude. This “I” does not perform the epoché but rather is bracketed by the epoché. Summarizing the Husserlian position Gupta (1998) writes:

Prior to transcendental reflection, a human ego’s reflection upon himself is confined to human self-apperception, and it moves within the parameters of the natural attitude. Bracketing of the world implicitly implies that, for the first time, an attempt is made to establish a reflective ego that is outside human perception from the very beginning. (p. 155)

So when Husserl emphasizes that I am still present, performing the epoché, he does not mean I am present as an empirical self, the “experiencing person” in Moustakas’ words. Rather, I am present in the transcendental mode of subjectivity, which transcends personal modes. The empirical person is, of course, still present—but one is witnessing from within a specific research attitude that places one’s empirical self and life “in brackets.”

From the perspective of my discipline, psychology, we can say that the epoché implies a very important and chosen psychological shift in one’s lived-perspective, a mode of being present that (whether or not one accepts its validity) has much more far-reaching consequences than merely becoming more open-minded.  More than setting aside personal prejudices, Husserl’s epoché requires a qualitatively more substantial bracketing, the setting aside of my habitual mode of being-an-I, that is, one’s empirical ego, what Husserl terms “I the man.”

The personal ego in transcendental phenomenology

As I’ve noted, Moustakas mistakenly equates transcendental subjectivity with the presuppositionless state aimed at through performance of the epoché, defining the transcendental mode of consciousness as the “person who is open to see what is” (p. 45).  In fact this statement makes an ontological and psychological claim that’s diametrically opposed to Husserl’s philosophy, properly understood: the epoché requires setting aside the question of “what is” in order to explore how presences are present. Moustakas’ aim seems to be self-actualization, personal openness, and authenticity. Moustakas’ discussion of phenomenology as a means of rendering the individual authentically present in their personal self-hood can only refer to the psychological, not the transcendental mode.

Of course phenomenology is not opposed to personal openness and authenticity! But once the transcendental reduction has been employed one is not in the “personal” realm in the sense normally meant by contemporary clinical psychology—and in fact the magnitude of that shift is unaddressed by Moustakas. Nor, as Moustakas seems to imply, is transcendental subjectivity a possession or a tool of the empirical self; as Kohák (1978) remarks in his commentary on Husserl’s Ideas I, “I do not ‘have a transcendental ego’” (p. 181).  Rather, one recognizes the transcendental mode of subjectivity by means of a disciplined, systematic practice of bracketing.

How is this handled in Giorgi’s research approach?

Moustakas’ driving interest appears to be psychotherapeutic work with individuals. But Husserl’s investigations are philosophical rather than therapeutic-psychological. Husserl’s work requires painstaking study and then careful modification in order to be applied in clinical or scientific contexts. For an example of a carefully thought-through clinical application, I would direct readers to Davidson and Solomon’s  (2010) chapter, “The Value of Transcendental Phenomenology for Psychology: The Case of Psychosis” in The Redirection of Psychology: Essays in Honor of Amedeo P. Giorgi.

Davidson, L. & Solomon, L. A. (2010). The value of transcendental phenomenology for psychology: The case of psychosis, in The Redirection of Psychology: Essays in Honor of Amedeo P. Giorgi, T. F. Cloonan and C. Thiboutot (Eds.). 99-130. Circle Interdisciplinaire de Recherches Phénoménologiques.