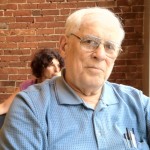 On May 25, 2013 the philosopher J. N. Mohanty and the psychologist Amedeo Giorgi participated in a panel discussion on phenomenology as part of the annual meeting of the Interdisciplinary Coalition of North American Phenomenologists held at Ramapo College. The talk was moderated by James Morley; questioners included Louis Sass and Lester Embree.

This is Part One of the panel;  Part Two will be posted later this week.  An in-depth interview with Giorgi that I moderated in 2011 can be read here.