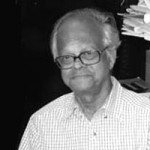 This is the Q & A portion of the presentation given by philosopher J. N. Mohanty and psychologist Amedeo Giorgi participated in a panel discussion on phenomenology as part of the annual meeting of the Interdisciplinary Coalition of North American Phenomenologists held at Ramapo College on May 25, 2013. James Morley moderated and questioners included Louis Sass and Lester Embree.

An in-depth interview with Giorgi that I moderated in 2011 can be read here.